The next phase of the Liberty Tree and Lewis Lumber Product’s involvement is very interesting.

A life long resident of Lycoming County PA, lived until a few years ago and worked out of his shop at home in Montoursville, PA.  He was a colonial furniture reproduction specialist! He was quite talented and his reputation was well known in that circle of craftsmen.  He occasionally purchased some exquisitely selected lumber from us.  His preferred raw material was locally procured lumber ( Cherry, Walnut, Eastern White Pine, and Butternut among some) that was sawn to yield.  Honduras Mahogany was his other wood of choice, duplicating colonial reproductions.  He worked with that well air dried material with hand tools exactly as it was done in the 1700’s!

In the early 2000’s he was contacted by a tree surgeon from Maryland who rescued the bottom portion of the poplar as it was removed from the site in Annapolis Maryland.   The healthy portion of the wood that was marketable had already been taken and sold to a specialized guitar maker.  But the lower portions were not commercially viable and thought to be worthless.  Not so! The artesian called us and we made arrangements after his friend had secured the pieces.  A portable saw mill produced boards.  Lewis Lumber stuck the boards and put them into the kilns at our saw mill Dwight Lewis Lumber Co., Inc in Hillsgrove PA.

Later our friend was commissioned by a group out of Philadelphia to make several items.  A Bible Box, a Spice Cabinet, a Carved Eagle, and parts to the Yoke of the Liberty Bell were just some of the items made.

Lewis Lumber Products was honored to be able to handle this wood.  The exact age is unknown, but probably pushing 400 years.  Wow, that was neat.  I have a picture of my son holding the Bible Box that eventually went to the Oval Office.  It is really a matter of pride to know that our little company in the hills of north central PA had something to do with out colonial heritage! 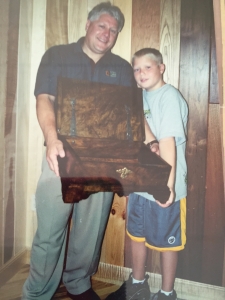 Bible Box , made from Last living Liberty Tree.  Eventually given to President Bush, but displayed here by Keith and son Christian.

Now we get to  share some of that with you!

More than just a lumber company, Lewis Lumber Products is dedicated to providing the highest quality lumber products, including FSC® products to meet your needs.