Lewis Lumber Products has its roots from Dwight Lewis Lumber Co., Inc. In 1941 Gleason Lewis built the first sawmill to take timber off the family farm in Sullivan County, PA. The business quickly expanded to purchasing timber from neighbors and supplying local businesses with high quality lumber. Following a fire in 1947, which completely destroyed the original mill, Gleason’s son, Dwight, stepped into the business to help rebuild the sawmill and continue expansion. Dwight Lewis Lumber Co. was formed and continued to acquire timberland to produce lumber for local and regional companies that have remained, even to this day, some of the company’s best customers. By 1966, the entire mill had been completely automated with a Line Bar Resaw, Automatic Carriage, Air Feed Works and a Slot Bin Sorter System. In the mid 70’s, Dwight’s’ two sons, Melvin and Marc, after graduating from Penn State University with degrees in Forestry, joined the company. Dehumidification kilns were built in 1985 and a wood fired boiler system was installed to supply steam to the kilns. Conventional kilns were added in 1992, while a fire destroyed the older dehumidification kilns in 1993. A new debarker and metal detector were added in 1995 and a second band resaw line was added in 1998. Another conventional kiln was added in 2000 along with a sorting line for grading kiln-dried production. 2001 saw the addition of a band saw head rig and an optimizing edger to increase yield, while maintaining production levels and the same quality strived for by Gleason Lewis in 1941. In 2005 a laser optimizer was installed to increase log yields on the head saw.  Dwight Lewis Lumber Co. remains the principal supplier of raw material to Lewis Lumber Products, Inc.

Lewis Lumber Products was born with the 1984 purchase of Reese Lumber Co. of Williamsport by Dwight Lewis Lumber Co., Inc. In 1991, a classmate of Marc Lewis’ at Penn State, Keith Atherholt, was brought on board to manage the newly formed company. This company quickly became a successful service oriented distribution yard and planing mill. The company operated in Williamsport, PA until the spring of 1997. A moulding company was purchased from Keystone Hardwoods and the equipment was moved into the current location in Picture Rocks, PA. Since arriving, the operation has expanded with warehousing space and additional secondary processing equipment. In 1999, a Yates American Planer was added to process planing orders more quickly. In 2000, another warehouse was built, which houses a sorting line for grading lumber. A GreCon/Dimter optimizing ripping system, utilizing a Raimann moveable multiple blade ripsaw was installed in 2001, along with a GreCon/Dimter optimizing chopping system. Our most recent upgrade has been the addition of two Weinig Powermat moulders.  In the summer of 2008 a new color scanning system was added to our optimizing ripping system.  A profile sander and centerline vertical resaw were added to the dimension mill in 2012.  Later that same year our sales team was outfitted with the ability to utilize remote technology to access accounting software for inventory and customer information.  As of 2013, our fleet of deliver trucks are all curtain side bodies (ensuring moisture integrity and cleanliness) and range in size to best fit customer location, order size, and on-time delivery.  In 2014, a new silo was built to replace the original concrete one installed in 1961.  2015 brings computer software and hardware additions include office package & work station upgrades, accounting and manufacturing upgrades, server upgrades, and the latest backup technology.

Both Dwight Lewis Lumber Co. and Lewis Lumber Products are chain of custody participants and Forest Stewardship Council® (FSC®) certified through NEPCon.  We are dedicated to providing high quality hardwood lumber and component products to the specifications required by our end users. We support sustained yield forest management and look forward to continuing the learning process with regard to our stewardship role in the forests.  The northern Pennsylvania forest around us is a healthy, well maintained, prolific and diverse temperate hardwood forest.  It is renewable and sustainable, thus it is established as “Green Friendly” and offers products to the design community.  Lewis Lumber Products FSC® certification shows our long-term commitment to sustaining the forest. 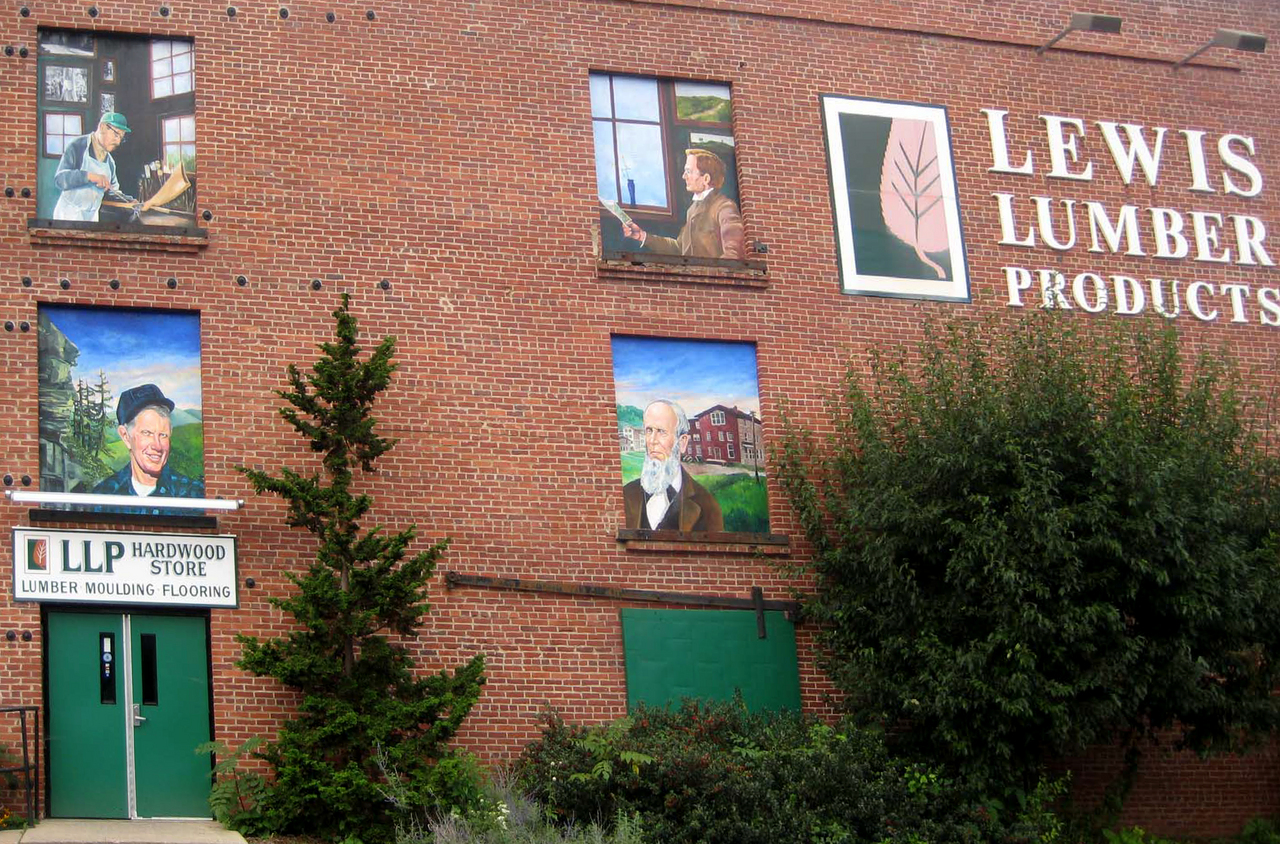 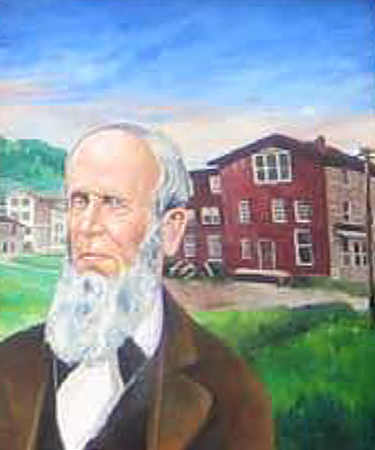 In 1848, Amos Burrows and his nephew A.R. Sprout settled in the area. They saw crude signs on the rocks on the Muncy Creek and called it “Picture Rocks” (see image above of “picture rocks” in Dwight Lewis mural). Burrows was also the first original developer and owner of the building LLP’s offices and store are located in. The first business in this location was a hardwood furniture business called Burrows Brothers Limited. 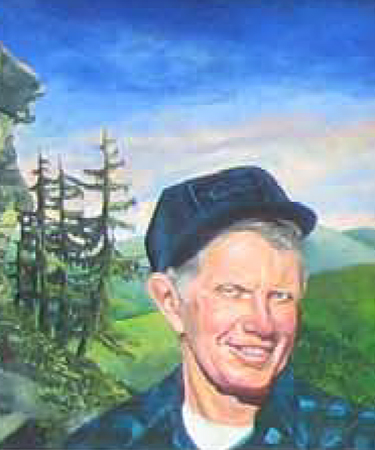 In 1941, Dwight Lewis, along with his father, Gleason, built their own sawmill in Hillsgrove, PA to harvest the trees on their farm and supply local residents with building lumber. Dwight accomplished a lot in his lifetime. He was a WWII Navy Vet, a pilot, MIT educated, a school board member, and the founder of a local fire department, just to name a few. Dwight’s sons Marc and Mel currently own Dwight Lewis Lumber in Hillsgrove and are co-owners of Lewis Lumber Products.

Lou Gansell was the town wood carver in Picture Rocks for many years. One of Lou’s projects was hand carving a large wooden piece for the Glassboro Normal School in Glassboro, NJ (Now Rowan University). The piece was created at the Williamsport Planning Mill Company, where Ganselll worked at the time. Lou is seen here carving a Pennsylvania Long Rifle out of curly maple. 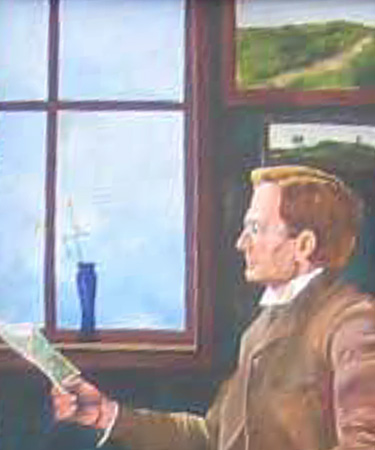 John Wesley Little was a renowned Pennsylvania artist who grew up in Sullivan County and resided in Picture Rocks. His endeavors included teaching budding artists at the Eagles Mere Chataqua Association, life long membership in the sketch and water color clubs of Philadelphia, and showing his art in exhibits in Europe and South America.For more information on John Wesley Little, visit rootsweb.ancestry.com and do a search.

More than just a lumber company, Lewis Lumber Products is dedicated to providing the highest quality lumber products, including FSC® certified products to meet your needs.